Chapter 2 - The Paralysis of an Unguarded Mind

There are few, if any, more malignant causes of spiritual paralysis than a mind unrenewed or unguarded. We learn by bitter experience that the main objective of the adversary as the most important means to his ends is the mind. Nine-tenths of the trouble with both the individual child of God and the fellowship (or arrested fellowship) of the Lord's people is traceable to the workings of the unrenewed mind in which there is carnality still or the mind unguarded becoming the playground of "The prince of the power of the air." There are three aspects or directions of this morbid activity -  Godward, manward, and selfward; or upward, outward and inward.

We take the second first.

The Paralysis of a Doubtful Mental Concept Manward

In this realm we have a whole catalogue of unhappy symptoms. Christians with a true knowledge of God and otherwise a real walk with God becoming the prey of all kinds of thoughts about others; misjudgments, prejudices, criticisms, imaginations, etc. Plutarch spoke of great public conflagrations which were resultant from a smoking lamp of gossip in an attic. How true it is that a smouldering suggestion made to the mind and unquenched, at once involves that one and many others in a fire of far-reaching spiritual devastation. The activity of our own natural mind apart from the true revelation of the Holy Spirit; the observation, suggestion, interpretation, report, description, information of others; the insinuation, complexion, perspective, presentation of the wicked spirits in, through, or apart from the above; the "judging after the sight of the eyes and the hearing of the ears" (a thing which it is said the Lord Jesus would never do), the reasoning of the reason; how these lead to arrest, inflammation, disaffection, not only in the member concerned, but - if we knew the laws of spiritual relationship - in the whole spiritual organism.

A germ of this kind may be a lie in substance, or, being truth in substance, nevertheless sets up a wrong basis of relationships, i.e., human instead of Divine; "Knowing after the flesh instead of after the spirit." Oh, if only the Lord's people would obey the profoundly wise injunction "Prove all things"! Such a concept as we have mentioned will soon be fed by the enemy, and seeming evidence will accumulate from all quarters to justify (?) it. When relationships are so infected co-ordinated action and corporate functioning is impossible and the devil's end is achieved.

Then as to the Godward direction.

The Paralysis of a Questioning Mind

This is peculiarly the peril of the severely tried children of God, or the lurking danger in times and places of adversity. A doubt as to the love, the wisdom, the power, the faithfulness of God. Few there be that pass through without at least the consciousness of this spectre, and not many have passed through deep waters and intense fires without a Godward "Why?" at least in their thought. "Why should it be me?" "Why should it always be me?" The ruin of the race was resultant from the acceptance of an insinuation from Satan that God was after all not really favourable to the highest well-being of man; that there was something He was keeping back, and suspicion of God has always been a master-stroke against the primary law of union with God - faith.

When this seed of doubt has been sown in the mind and allowed to remain it is not long before every phase of spiritual vitality is paralysed; prayer, fellowship, the Word, ministry, service, testimony; and God can do nothing with a doubter.

The Paralysis of an Introspective Gaze

There are so many whose eyes are always turning inward; self-scrutinising, self-analysing, self-judging. They are always looking at their own spiritual tongue and taking their own spiritual pulse; comparing themselves unfavourably with others of their knowledge, and projecting their own spiritual sensibilities to be hurt. What accusations and condemnations the enemy is able to level at and put upon such! It is no wonder that before long they entertain doubts as to the truth of their own salvation and of God's acceptance of them. This leads to the bogey of having committed the unpardonable sin. Oh, the perils of a too strict an individualism in salvation!

It is clear that this introspective morbidity issues very quickly in paralysis, and joy and peace are "Dead-sea fruit" here.

The Way of Deliverance

Well, having diagnosed the case, it remains to point the remedy.

Before there can be any hope of a cure there must be the clear, definite, deliberate, and conclusive recognition of the FACT that this whole trouble originates with and is perpetuated by the "hosts of wicked spirits in the (lower) heavenlies," "The prince of the power of the air," "The God of this age" (Ephes. 6:12, 2:2; 2 Cor. 4:4).

These powers of darkness are always trying to get a lodgment and obsession in the mind by a thought or idea, and so colour or fill the entire horizon therewith. They will hammer and hammer away with a suggestion to get it entertained.

No wonder that military terms are used by the Holy Spirit in this connection. "The weapons of our warfare are not carnal, but mighty through God unto the casting down of strongholds, casting down imaginations and every high thing... and bringing into captivity every thought," 2 Cor. 10:4. "The Word of God is... sharper than any two-edged sword piercing even to a dividing asunder of soul and spirit... and is a discerner of thoughts..." Heb. 4:12. "The peace of God shall garrison your... mind."

Thus, in the matter of the mind an intense warfare is clearly revealed as going on, and cleaving, captivating and defensive forces are needed. God's provision is not for our protection from our own flesh, that He requires us to reckon ourselves as dead to, but against the adversary. It will be as well for us to bear in mind that the powers of evil interpose between ourselves and others, and others and ourselves, and set up false situations, distort things said, misinterpret anything capable of being misinterpreted, and even creating or suggesting a sense of strain and disaffection when in fact there is none. The recognition of this as being so, and the more so as the spiritual life and work intensifies (explaining why the most spiritual often become the most deeply involved), is basic to any deliverance.

2. The location of the trouble

A further step toward victory is a tracking down of the location of the trouble. We shall have to secure the basic reason and cause of the evil. After all, is that reason in ourselves? Is there not really and truly a revolt in us against it? Is it because we have personal interests to look after? Are there secret personal ambitions, concerns, rights (?) provinces? Does it really matter to us whether we lose all if only Christ comes into His own? Have we "learned how to be abased as well as how to abound"?

If we can give a clear answer to God in such matters may we not conclude that these thoughts and feelings which constantly worry us are not of our choosing or consent? Would we be gratified or grieved if our thoughts about others proved true? This is a good test.

Now whether it be from without or from within there must be an instrument and ground IN us as well as outside of us for victory. This is the renewed spirit and renewed mind. The natural mind and the carnal mind are Satan's ground. We need not here refer to the Scriptures which refer to this; it is enough to say that the Holy Spirit resides within the renewed spirit of every one "born of the Spirit." His work it is to make the Cross of Christ real and effectual in the believer's life. But He does this co-operatively. That is, He bears witness to the truth and against the lie. He judges things for us and in so far as we walk after the spirit and not after the flesh, we are swift to discern what the Spirit saith. When thus He bears witness and registers His judgment, He calls upon us in our renewed spirit to take His enablement and positively and deliberately take the judged thing to the Cross and on the ground of Calvary's victory to refuse and repudiate that thing. Thus we learn to be strong in spirit as we act in faith upon the energising of His might, but it all remains His strength and never becomes ours independently. We shall find that such a course brings deliverance, but it may be that the enemy will return again and again with the old thing until he finds that we have learned how to "resist" effectually, and thus he will change his method. It is the Body of Christ and its corporate witness which is involved, and a due recognition of this will be a more adequate dynamic and motive for resistance than a merely personal concern.

The two diagrams herewith illustrate the principle herein enunciated, and it can be extended to everything that makes for spiritual paralysis and death. 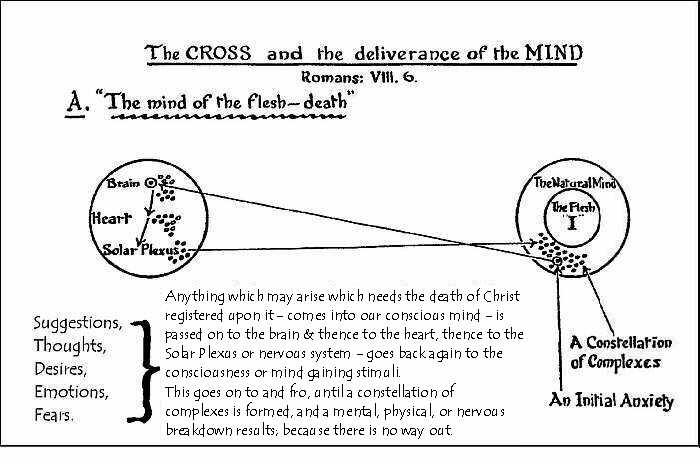 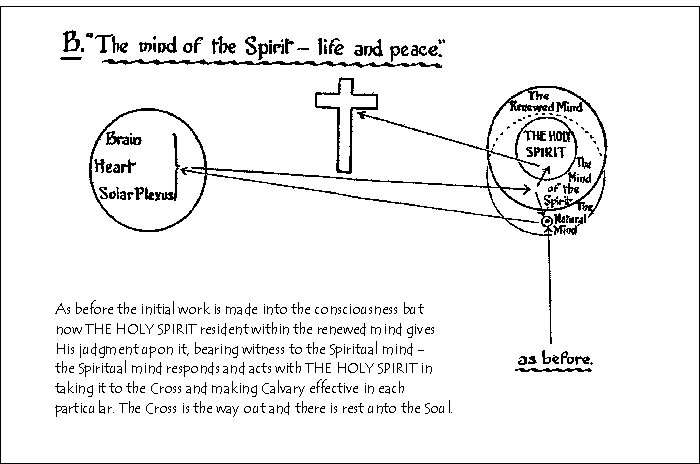